WHAT ARE LICE AND WORMS?

Lice and worms are quite common parasites in tank. Both of them rely on goldfish to thrive and reproduce which can potentially lead to health problem in your fish. Lice can usually reach up to 5mm in diameter and you can see them quite well without using a microscope. Don’t mistake them with algae or dirt. While worms, Anchor worms can be seen with naked eye on the fish body, while tapeworms are internal parasites, you may also see live or dead tapeworms in your fish’s stools, or hanging from the anus of the fish.

Lice and worms are both visible and can lead to serious health issue in your goldfish. Thus, identifying them is important before action taken. you may find the following symptom in your tank:

There are a  broad-spectrum anti-parasitic medications that you can add to the goldfish tank in order to eradicate parasites such as worms and lice, and these are usually highly effective, although they may require more than one treatment.

Dipterex (Dylox neguvon) is effective in combating lice and worms.It is an insecticide that is soluble in water, comes in liquid or powder form and comes in different potencies ranging from 40 to 98%.

In the case of anchor worms, you may need to physically remove visible worms from the body of your fish using a pair of tweezers in order to give them the best chance of recovery.

If your tank has played host to either lice or worms, it is important to treat the main tank itself, Sterilize the tank completely (including plants) to kill any adults or nauplii of the lice and worms even if the remaining fish after you have removed any sick ones are not showing any signs of illness.

WHAT IS ICH a.k.a WHITE SPOT?

Goldfish encounter a common disease named ich , also know as white spot disease which caused protozoan parasite. It is round, covered by cilia (hair-like extensions), and about 1 mm in diameter and so visible to the naked eye. You can obviously see white spots on the infected fish. The parasite penetrates the skin surface of the goldfish and feeds on its tissue and blood.The fish will be ill, with fins held close to the body, and you probably will see the fish flashing off of the object in the tank trying to dislodge the parasite. If the gills are affected your fish will gasp for air.

After a few days of feeding on the fish’s blood, the parasite will leaves the host and  forming a cyst in the tank. Once the reproductive stage complete, about 1000 juvenile parasite are released. These are much smaller than the adult stage and are not visible to the naked eye.

This free-swimming form then seeks out a host, burrows into their skin, and the whole cycle begins again. In addition, because of the small size of the free-swimming stage, they are easily able to enter the gills of the fish. By the time you find white spots on the fish’s fins and body the gills are usually already heavily infected with ich.

The speed of this cycle depends on water temperature.  At 24-26 degrees Celsius the entire life span about four days. Higher temperature may speed up the life span of the parasite.

First of all, raise the water temperature gradually to 30+ degree celsius using a aquarium heater and this action will speed up the life span of the parasites . so , it will leave the goldfish quickly . High temperature is too hot for to juvenile parasite to survive.

You should place the goldfish in a mild salt bath and the following treatment are recommended:

I tried on the combination of mild salt with Malachite Green or Methylene Blue . It both works for me .

When all cysts have disappeared after a few days,do a 50% water change without adding any chemicals.  Make sure the water temperatures are the same. 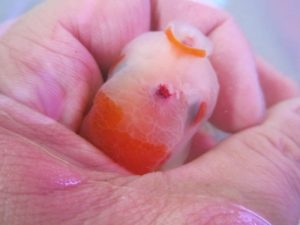 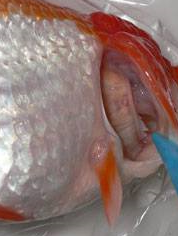 Fluke is a parasite with two different types :-gill flukes and body flukes. Flukes do have external sucker with hooks that attaching to the host. They are one of the most common types of aquarium and pond parasites, but barely seen with the naked eye. Both type of flukes can be found in a goldfish simultaneously. Both of them reproduce differently, Gill flukes lay eggs, body flukes produce live young.

Flukes will not bite the fish or suck blood, but feeds on the fishes slime coat, therefore endanger the fishes protective layer and allow penetration of other parasites.

Flukes are normally introduced into an established tank with the transfer of new fishes from the pet store without the means of quarantine the new arrivals.

Transferring flukes into your tank can be prevented by  quarantining new fishes from pet store for at least 30 days , and ensure that any equipment used for more than one tank is sterilized before sharing it between tanks.

If you suspect the presence of flukes in your tank. one of the best way to diagnose it is scrapping the gills and examine it under a microscope.

Eliminating flukes from the tank can be quite challenging. Most of the treatment involve toxic chemicals like formalin. Thus the control of the dosage is important. i would suggest Formalin (37½ % Formaldehyde in solution). Place the infested fish in a clean water with the formula of one teaspoon of non-iodized salt/gallon and 20 drops of formalin/gallon.  Spread evenly. Leave the fish for 10 – 12 minutes.At the first sign of stress, remove the fish into an isolated tank that has had one teaspoon of non-iodized salt per gallon added.

Repeat this treatment again after 1 day and probably another time on the second day if there is evidence there are still flukes present.  Sterilize the isolated tank 12 hours after treatments to flush away shed flukes.

Tip:
It is extremely important when breeding goldfish that the eggs are flushed with clean water and put into a container with water that hasn’t been in contact with adults.
Gill flukes are particularly dangerous to young fry under a month old and can kill off an entire brood in two or three days. The fry appear to have white beards hanging beneath their gills and if you look carefully, they can be seen moving.

TREATMENT FOR THE FRY