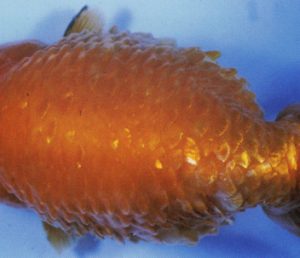 Generally dropsy is not a disease but a sign of disease which you can easily observed because the fish is bloated . Frequently , the fish scales stand out of the body giving it a pinecone-like appearance. Dropsy is normally cause by the bacterial infection in kidney which retain the body fluid causing the swelling . When you observed the symptoms normally chances of survive will be low. Thus, you must always observed the behaviour of the fishes. if you can diagnosed early , chances of the surviving is definitely higher.

Dropsy occurs when your goldfish suffered from kidney malfunction. When they are not able to get rid of all the water which is taking in from the tank or pond and instead starts to swell up like a balloon. There is a certain amount of salt level in their body which is normally higher than the salt level in the tank/ pond. Naturally , the fish will maintain the salt level in the body, expel excessing water and create a balance in it in order to survive . This process is control by Goldfish’s kidney.

There is several causes to Dropsy :- Infection or injury that causing the kidney become less efficient, Intestinal blockage or anything else that upset the balance causing the water to enter the body of the goldfish.

To be honest , It’s very hard to cure dropsy. However , you may try the following steps to give your goldfish a small chance of recovery. First, isolated the affected fish into a quarantine tank. Add Anti-bacterial treatment such as Acriflavine and Epsom salt (in a portion of 2 1/2 table spoon in 10 gallons of water) reason being is to draw out the excess fluids in the goldfish to give it a relief. Remember to replenish the salt when you do water change. Keep the fish in the quarantine tank until the symptoms disappeared. However , it’s still very much depend on the the kidney function whether it can repair by itself during the quarantine tank treatment.