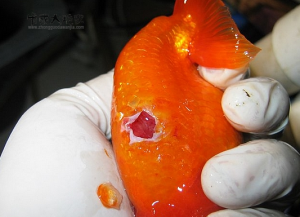 Ulcers are open sores on the surface of the body of the goldfish, which look like red, white or pink wounds. It caused by the presence of bad bacteria attacking the surface of the scales, leading to irritation ,inflammation and infection.

The bad bacteria will generally only thrive and reproduce in a large enough numbers to be a threat to your fish if something within the tank is not right. For example,  poor water quality or your fish are not on a balanced diet.

The bacteria can also be introduced into the tank when you add new fish. Therefore , you should quarantine new fish for two to four weeks as a precautionary measure to ensure the rest of the fish in the tank is not affected.

What if you fish is diagnosed with Ulcer? Do not panic !!! Ulcers can be treated successfully .you just need to give some extra care to the affected fish . First of all ,remove them and put them into an isolation tank. You will need to clean the affected  fish on their ulcer with iodine and hydrogen peroxide on a Q-tip. Add on antibiotic  solution to eradicate the bacteria. Meantime, Keep an eye on the non-affected fish too . If there is a symptom of ulcer , you may need to isolate them too.